Where is that camera anyway?

The toddler moves like a pint-size tornado across our living room, leaving it strewn with umm..interesting debris. Blinded by what he perceives to be his success, he ups the pace of his game only to lose his already precarious balance and go crashing into the sofa, flying curls and all.

He sits down with a thud, shell-shocked for a moment. His eyes brim with tears and his lower lip quivers dangerously. Before his sorrow is complete, the older brother (who is always watching) swoops down from his chair and gathers him up in his arms, murmuring in a gentle voice, “It’s okay. Your Ayya is here. You’re okay.”

He carries his little brother to his chair, seats him on his lap, and proceeds to kiss him roundly on both cheeks before nuzzling his curls.

“Fikk Armaan vondt? Did Armaan get hurt?” he enquires almost rhetorically, while continuing to cuddle him and rub his back. The toddler looks adoringly at his protector, his saviour, before throwing both his stubby little arms around his brother’s neck for a hug that takes the wind from his sails. “Amind, Amind,Ayya..” he murmurs stroking/pinching his brother’s cheeks and clenching his jaws as the affection overwhelms him. As he lays his head gently against his brothers chest, his tiny little body relaxes and his contentment is complete. If only for a New York minute.

Our boys. Our throat-lump worthy little ones. Loud and pushy one minute, inexplicably gentle and affectionate the next.

In another couple of minutes, they will be back to pulling hair and pushing each other around. But for now I can echo Maria, who sang so soulfully to Colonel Von Trapp:

“Nothing comes from nothing

So somewhere in my youth or childhood,

I must have done something good.”

In the absence of pictorial evidence of aforementioned moment, I offer you some Sibling Lauw ( you have to be from Kerala, or know keralites well, to get that!) 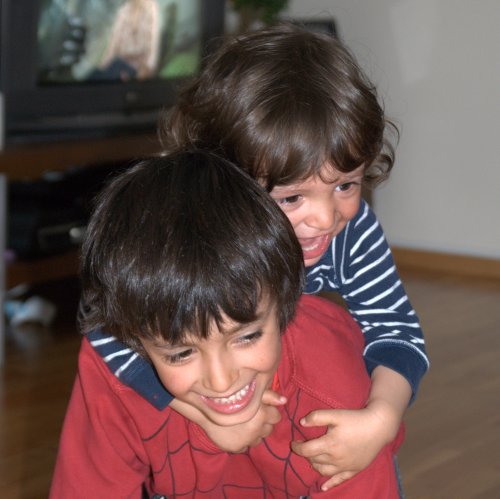 21 responses to “Where is that camera anyway?”